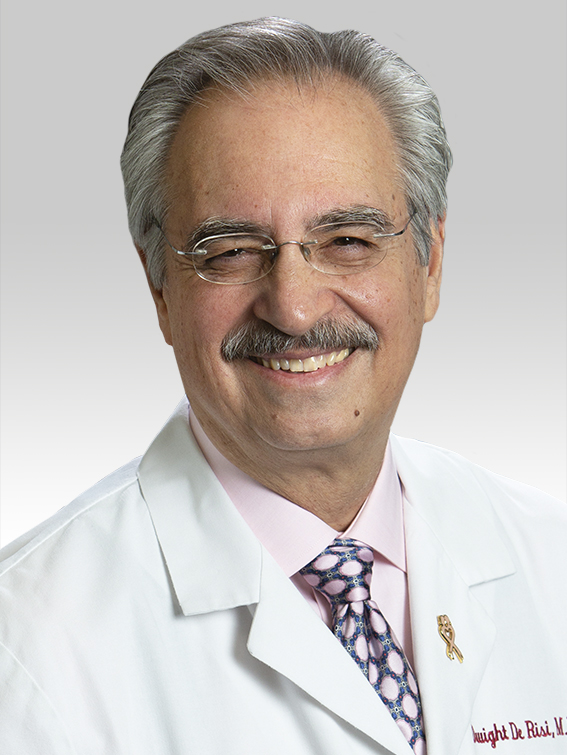 Dr. Dwight C. De Risi is Long Island’s leading surgical oncologist, specializing in diseases of the breast. He has been in private practice for nearly 35 years, 10 of which were as the Chief of the Breast Service at ProHEALTH Care Associates before joining NY Breast Health. He attended Seton Hall University, received his doctorate from Georgetown University School of Medicine, and completed his four-year surgical residency and one-year chief-ship training at North Shore University Hospital in Manhasset, NY. In addition, he completed a one-year fellowship in Pathology at Roswell Park Cancer Institute in Buffalo, NY. He obtained his board certification in general surgery.

Through his years in private practice, Dr. De Risi has remained a leader in his field by introducing and popularizing cutting-edge surgical and diagnostic techniques. Some of these have included mastectomy with immediate reconstruction, partial mastectomy with oncologic plastic reconstruction, lumpectomy with sentinel lymph node biopsy, skin and nipple-sparing mastectomy, ductal lavage, MRI of the breasts, accelerated breast brachytherapy, the HALO procedure for evaluation of nipple duct fluid, and cryoablation of tumors.

Dr. De Risi is a member of many prestigious organizations including the American College of Surgeons, The American Medical Association, The Society of Surgical Oncology, The American Society of Clinical Oncology, and The American Society of Breast Disease. Dr. De Risi has been recognized and honored for his accomplishments by several organizations including the Sass Foundation for Medical Research, The Beth C. Tortolani Breast Cancer Foundation, The New York College for Wholistic Health, Education and Research, Glen Cove CARES, Lean On Me Breast Cancer Network Inc., the prestigious Networking Magazine’s, Man of the Year David Awards, NOW (Nassau Organization for Women), and North Shore University Hospital at Glen Cove. In addition, Dr. De Risi received the Gay Stoddard Award from the Susan G. Komen of Greater New York, the National Congressional Committee Leadership Award, and was presented with the Honorary Co-Chairman President’s Advisory Board Award. Most recently Dr. De Risi was honored by the American Cancer Society as an outstanding community leader in his field of expertise.

He attributes his continued success to the love, understanding, and support from his wife Donna, and his four children Darren, Drew, Dara, and Deirdre. The greatest joy in his life is his family. He is a proud grandfather. His goal is, “to help rid the world of this dreaded disease called breast cancer,” which he believes will be a reality in the not so distant future.