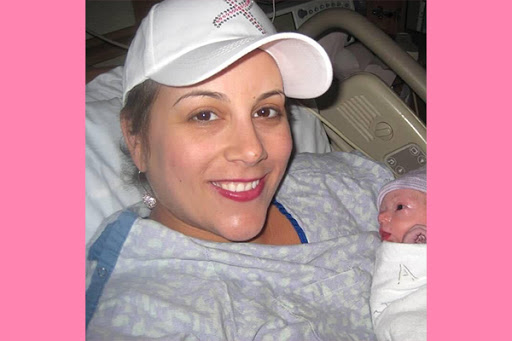 In June 2010, Melissa had a seeming brush with fate when she discovered a novel, Firefly Lane by Kristin Hannah, on her colleague’s desk. Melissa, then 34, a bookworm, a teacher, and pregnant with her second child, never would have imagined that her love for reading would save her life.

In an improbable twist, a character in the novel was diagnosed with inflammatory breast cancer. After reading about signs associated with the disease, and noticing slight redness, swelling, and bridging in her own breasts, Melissa decided to see her obstetrician for a screening.

Her obstetrician referred her to The Fortunato Breast Health Center at Mather Hospital for a sonogram. After finding swollen lymph nodes on her collarbone, Melissa explained to the doctor about the book she read and her belief that she, too, had inflammatory breast cancer. Contrary to her intuition, the doctor suspected Mastitis, an inflammation of breast tissue that sometimes involves an infection.

Melissa was sent to a general surgeon for antibiotics. A common misconception about antibiotics is that they don’t work on cancer. So when the infection calmed and the redness went away, her lymph nodes became softer. The doctor performed a biopsy which confirmed her suspicion after all. Melissa was diagnosed with stage III inflammatory breast cancer.

The day following her diagnosis, Melissa had an appointment with an oncologist, Dr. Jeff Vacirca. Confident with his care, Dr. Vacirca put Melissa on a six-round course of chemotherapy so that she could have a full-term pregnancy. About four months later, Melissa welcomed her newborn son, Charlie, to her new family of four.

After giving birth to Charlie, Melissa finished chemotherapy treatment and began surgery. She underwent a double mastectomy, radiation, and reconstruction. As she healed, she began to set her sights on returning to work. By November 2011, Melissa had completed her treatments but was still on Herceptin, oral chemotherapy. Another year passed and Melissa continued to make plans to return to work. She even began to look at houses closer to her school district.

In January 2012, Melissa knew something was off. She found herself stuck in the hospital during a snowstorm with a brain tumor. “I remember it was 11:30 pm and Dr. Vacirca called to let me know he saw my brain scan and that I was going to be fine. He saved both my child’s life and my life once, so I trusted him,” she recalled.

The tumor was removed and Melissa was given oral chemotherapy and radiation yet again. Temporarily paralyzed on the right side of her body, Melissa was unable to walk, or eat. She lost her hair a second time due to radiation and began physical therapy to regain her motor skills. Now, her biggest challenge is walking and maintaining balance but she continues to just make the best of it.

Confident in her future, time has a new meaning for Melissa. She credits her success to the individualized care that she received. “I'm able to live my life freely because I know that no matter what happens, I have a strong medical team behind me,” she expressed.

Melissa’s experience with breast cancer fueled her interest in advocacy and support for breast cancer patients. Currently, she volunteers for Mondays at Racine and Hope for Two, The Pregnant with Cancer Network. Melissa attends Young Survival Coalition conferences and enjoys speaking to other women in similar shoes. She recently attended a retreat in Utah for breast cancer survivors where she met her new best friend.

We can all make a difference in the fight against cancer by being aware and pledging to help others. “Live in the present,” Melissa urges.