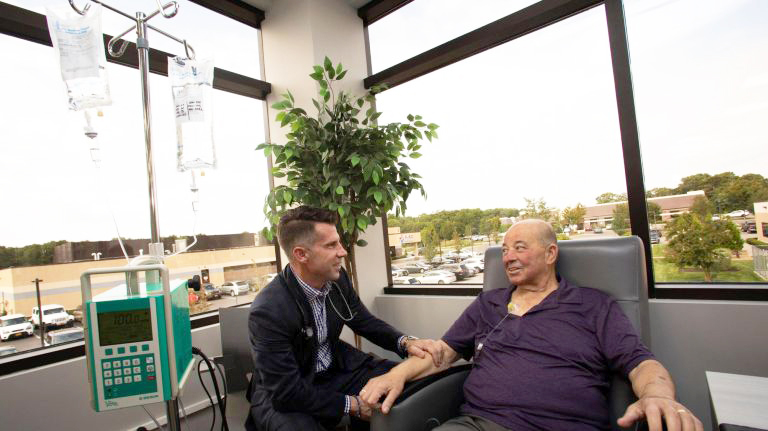 Regional health care systems are spending hundreds of millions of dollars to expand their cancer care services on Long Island.

The money is being spent to open new locations, update technology and add staff. Experts said the initiatives are necessary to deliver quality care and operate in a highly competitive market.

The care is becoming increasingly necessary as the average age of the region’s residents grows older, which, in turn, has led to more cancer diagnoses. The growth of local facilities means fewer patients need to travel to New York City or elsewhere for routine treatment.

“It’s important reputation-wise to have a local presence and to be viewed as a leader,” he said. “That’s a function of quality and convenience, both of which are important in health care in general, and certainly in cancer care.”

“In the end, every health system wants a piece of this business, and when competitors are placing locations around a region, you do too,” he said. “We see this playing out in many parts of the country.”

On Long Island the expansion is rapid, and expensive because of the scarcity of open space, medical experts said. Health care systems are spending on new locations, saying it’s necessary to properly serve patients.

Stony Brook Medicine is months away from officially opening to patients its 240,000-square-foot cancer center on the grounds of Stony Brook University Hospital.The $194 million construction project is part of a larger, approximately $450 million expansion. Stony Brook is also opening a cancer facility on County Road 39 in Southampton later this year.

Manhattan-based Memorial Sloan Kettering is also in expansion mode. The cancer care network, which already operates locations in Commack, Hauppauge and Rockville Centre, is months away from opening MSK Nassau, a $180 million, 114,000-square-foot facility at the Hub in Uniondale. About 220 employees will be placed in that location, which will have 20 cancer doctors covering multiple disciplines, such as medical and radiation oncology, radiology and surgery.

Northwell Health is spending more than $300 million annually on cancer care , including money to open new facilities here and in Manhattan, where it plans a block-long location on Third Avenue that will have a major cancer component. It recently hired Dr. Richard Barakat, the former director of Memorial Sloan Kettering’s regional network, and named him physician-in-chief and director of the Northwell Health Cancer Institute. Northwell also plans to increase its spending on cancer care by 8-10 percent annually for each of the next five years.

There were 18,000 new cases of cancer per year on Long Island, on average, from 2011 through 2015, according to the most recent data available from the state Department of Health.

“Some of this is because we are living longer, and this is one of the main diseases that comes with aging,” said Dr. Luis Isola, director of cancer clinical programs for Mount Sinai Health System in Manhattan. “We recognize the need on Long Island and the region as a whole. Long Island is not the Midwest, so there isn’t unlimited real estate, so we are living within the confines of the market. But the local locations are necessary.”

Just last month, Mount Sinai opened in Greenlawn a multidisciplinary facility that includes cancer services. Isola said Mount Sinai also expects to open cancer care-focused locations east of Oceanside-based South Nassau Communities Hospital, which agreed to join the health system. That deal is expected to clear regulatory hurdles by the end of 2018. Mount Sinai is also opening a Manhasset medical office this month that will have “hematology and oncology consultative services initially and a full infusion suite later in the future,” Isola said. Infusion suites are where medicine, including cancer treatments, is administered directly into a vein.

“We need to be where our patients are, and it needs to be good, coordinated care,” Isola said, adding that each location costs “millions of dollars.”

The Perlmutter Cancer Center at NYU Langone offers cancer care at its flagship Long Island hospital, NYU Winthrop in Mineola , as well as in Lake Success and at a year-old facility in Huntington, where it shares space with other disciplines.

And Catholic Health Services, which launched its cancer institute about six years ago, is expanding staff dedicated to those services, which include a systemwide lung cancer screening program.

The focus on local care lets patients receive treatment such as radiation and chemotherapy close to home, and for most of the health systems, it also leverages their network of multispecialty physicians.

“Cancer care, especially the new targeted therapies, can have profound side effects,” Barakat, at Northwell, said. “It can lead to pituitary problems, high blood pressure, and so much more. That’s why an integrated cancer unit needs to work hand-in-hand with endocrinologists, cardiologists, pulmonologists and other specialists, and having it all in one system, together, makes it more effective and less expensive care.”

“By having all our experts under one roof, we are also able to offer patients clinical trials that used to be harder to access locally,” Barakat added.

He said mobile technology is playing a role in the team approach to cancer care. Northwell recently invested $500,000 in Playback Health, a Mount-Kisco-based startup that has launched an app that helps patients keep track of their medical care. Doctors can create content specifically for patients, who can view and share information on their mobile devices. The content includes audio and video clips, as well as PDFs. Barakat said doctors will also be able to collaborate and communicate via the app.

Memorial Sloan Kettering is piloting a “telehealth system,” which allows patients and doctors or nurses to speak remotely via phone or video conferencing, and which “is a paradigm shift in how we deal with patients,” added Dr. Oren Cahlon, vice chair of MSK’s department of radiation oncology. MSK is using telehealth to provide supportive care, psychiatry and some assessment services tied to radiology care.

“As we take on more patients nationally and internationally, an advanced telehealth system is necessary,” he said.

NYU Langone is also pushing coordinated telemedicine through an app that connects to its electronic medical records system. NYU Langone said it has about 876,000 active patients on the app, systemwide, with about 130,000 patients on Long Island. Their oncologists actively use the product to communicate with other doctors at NYU Langone, and with patients.

Dr. Michael Buchholtz is a director at the NYU Langone Perlmutter Cancer Center in Huntington, “The technology around cancer care, including timely access to a patient’s care, is transformative,” he said of new telemedicine efforts. Photo Credit: Barry Sloan

“The technology around cancer care, including timely access to a patient’s care, is transformative,” said Dr. Michael Buchholtz, regional director at NYU Langone’s Perlmutter center in Huntington. “Within the system, the utilization of this information means better, timely and more coordinated care.”

But Dr. Jeff Vacirca, a medical oncologist and the chief executive at New York Cancer & Blood Specialists, based in Port Jefferson, said cancer patients can receive coordinated care without being restricted to one health network.

<b “The medical record systems are all compatible, we can all share our patient records, so that’s an excuse,” Vacirca said. “We are cancer specialists, and when we need to bring in other experts, we send the patient to the physician who offers the best care. We don’t make that decision based on which system a doctor belongs to, and neither should anyone else. We are blind to who they work for.”

New York Cancer & Blood Specialists handles about 350,000 patient visits annually at its 42 locations, including 15 on Long Island, where it plans to expand further in the next year. The group has 850 employees, including 80 physicians.

“And we have psychologists, nutritionists and social workers in every office,” Vacirca said. “Patients get their care close to home with less disruption in their lives.”

Jeffrey Vacirca, MD, FACP. is a board-certified hematologist and oncologist at New York Cancer & Blood Specialists, where he serves as CEO and managing partner. He is also the current president of the Community Oncology Alliance.